Urban Air Mobility: a Revolution in the skies

It’s a commuter’s dream to have their automobile take flight and zip over others trapped in rush hour traffic. Private sector and government agencies in the United States, European Union and China are working to make that flying car setup possible. Major aerospace companies in the world are of the view that Urban air mobility (UAM) leverages the sky to help people link better to cities and regions, offering them more opportunities to connect. The substantial population growth in cities around the world is likely to produce a real need for state-of-the-art mobility alternatives as ground infrastructure becomes more and more congested. Providing people with a secure, viable and appropriate solution that leverages the airspace above cities could be a solution.

While some modes of Urban air mobility exist today using traditional helicopters and rationed prevailing heliport infrastructure, they are substantially narrower in possibility than the concepts of operations (CONOPS) envisaged by UAM advocates and have historically been mixed in their record of safety and economic accomplishment. The next generation of UAM will eventually be an union of transformative technologies and functioning models including several elements of electric propulsion, novel and distinctive passenger aggregation and advertising channels, modification of prevailing infrastructure, and innovative aircraft that are now moving from concept to manufacturing. Hybrid electric aircraft are being earnestly being studied as one of the revolutionary design ideas that can revolutionize the UAM market.

Aviation agencies in U.S and European Union are working directly with a number of companies engaged in cutting-edge air mobility to certify the safety of their vehicles and their processes. Aviation agencies are also teaming with developers and other federal agencies to determine best practices and industry standards for the safe induction of components including battery systems, automation and controls

Amsterdam based Market Forecast’s latest report “Global Urban Air Mobility (UAM) - Market and Technology Forecast to 2028” examines, analyzes, and predicts the evolution of UAM technologies, markets, and outlays (expenditures) over the next 8 years – 2020 -2028 in the aerospace industry. It also examines electric & UAM markets geographically, focusing on the top 95% of global markets, in the United States, Europe, and Asia. Throughout the report we show how UAM are used today to add real value. To provide the most thorough and realistic forecast, this report provides a twin-scenario analysis, including “steady state”, emergence of new electric & hybrid aircraft technology. 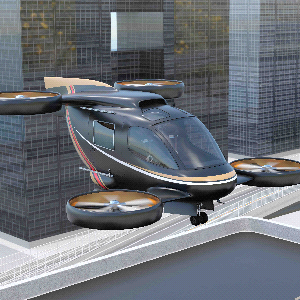