Naval warfare commenced roughly 3000 years ago. The first Sea Battle was recorded in 1210 BC. The war between the Hittens and Cyprus at the Mediterranean Sea embarked upon the inception of maritime combat. The Battle of Delta was mentioned as the second sea-based battle within the history of Naval warfare.

The ships made use of a maritime tactic coined as ramming to destroy the enemy warships. The development of Gunpowder in the 16th century induced a change in trend associated with Naval combat. Modern warships make use of advanced munition, design, and protection based technology which hereafter curbs the trajectory associated with maritime warfare. Navies around the globe make use of both surface as well as underwater combatants which are equipped with heavy ordnance to enhance their sea-based abilities. A capable warship can deliver a few long range missiles and neutralize the enemy much before the foot soldiers enter the enemy territory.

Surface warships are predominantly naval combatants that are deployed for attack, counter operations and maritime interdiction on the surface of the waterbody. These ships have enhanced firepower with integrated munition as well as stealth technology. The stealth capability reduces the ship's radar cross-section (RCS), i.e. it reduces the EM waves generated by these warships. These warships are essentially used to engage incoming and submerged targets via the ship’s embedded munition technology. The combatant drives the use of manned carried craft towards redundancy.

Naval forces on a global scale have been aggrading their operational ability and protection capabilities. Active Protection System (APS) is an integral part of the design technology which is integrated as a part of the surface combatant. The incorporation of this technology boosts the ability to counter incoming ballistic missiles (ICBMs) and kinetic energy penetrators (KEPs).

In the year 2017, Israel announced the inclusion of a sea-based Iron Dome, also known as C-Dome within its class of warships. The Active Protection System (APS) has the ability to counter multiple incoming threats at sea. This product was fabricated after 18 months of a collaborative effort between the Israeli airforce, Israeli Navy, and the local manufacturing industry-Rafael. The INS Lahav’s onboard protection system integrated the Iron dome with the Adir surveillance, track, and guidance radar. This ship is classified as a Sa’ar-5 corvette-class surface ship. The initiative commenced with the objective of aiding asset security to Israeli warships in the Mediterranean Sea.

The Adir radar system was developed by Elta Systems to support the Barak-8 anti-missile and air defense system. The modular technology is integrated with the Iron dome to improve detection and target tracking abilities. Consecutively, the Iron dome would intercept the incoming projectiles.

Israeli Iron Dome has been credited with 1700 successful intercepts since it was first deployed in the year 2011. The ship-based Iron dome is operated by air defenders. The same doctrine, as well as skill sets associated with the land-based Iron dome system, is to be followed by this technology. The APS system was developed via the inclusion of improvements based on the tactical analysis in the Gaza War (2014). The battle indicated a requirement for improved sea-based counter-attack abilities. The C-Dome is anticipated to provide enhanced defense associated with the Israeli coast, Israeli ships, and offshore energy assets. The technology can also be used to defend the threats within the Nothern border of Israel.

The optimized system can counter both lower-tier threats as well as high-end threats. The supersonic, anti-ship P-800 Yakhont cruise missile can be classified as a fine anecdote for a high-end threat. Moreover, the service plans to double the number of Iron Dome interceptors deployed on Sa’ar-6 corvettes, constructed by ThyssenKrupp Marine Systems. This is due to the growing rocket threat to Israel’s energy asset. The Proliferation of 12mm Grad Type rockets and long-range missiles in Lebanon and Gaza have boosted the APS procurement associated with this sector.

The penetration of munition technology is one of the factors that embarks the rise in modern Naval warfare. The change in design and structural parameters for surface combatants is another important segment that governs the evolution of this sector. In addition to countering attacks, the warships are also equipped with sophisticated operational capabilities that facilitate smooth operation during rough weather conditions.

The warships are also equipped to handle harsh meteorological conditions which may hamper the trajectory and formation associated with an operation. The stealthy Zumwalt class destroyer has an incomparable hull design which helps maneuver the combatant. The stability of the hull was questioned previously. The warship was taken to Alaska where it faced Sea State Six conditions. The sea waves were essentially 13-20 feet high. The Tumblehome hull design aided the ship’s security in terms of stability. The rolls experienced within the cabin were equivalent to a value less than or equal to Sea State Three.

Some of the modern warships also make use of advanced material and 3-D printing technology to design parts of naval combatants. These technologies accelerate the growth associated with the design segment since system specifications could be met to an accurate scale. Moreover, the cost of construction and the enhanced material properties also boost the expansion of this sector. 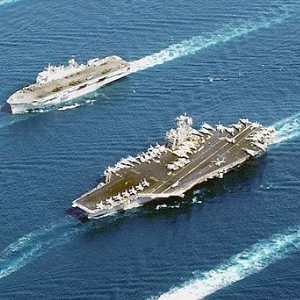