Targeting Pods market over 40 billion until 2028

Targeting pods were first introduced in the mid-1960s. It directs precision-guided munitions (PGM) including laser-guided bombs to the intended target. Targeting pods provide advanced functionality such as embedded GPS that enable users to achieve specific target position and, with the aid of wired and wireless networks for better connectivity, allow data to be saved and exchanged with other users. By imposing contracts and addressing the demands of warfighters, including reliability rates and availability, governments are spending and enhancing their capabilities globally. Also, ongoing investments in short-wave infrared to enhance low- and haze-light targeting capabilities and the advancement of a two-way data-link configuration have doubled the ability to target pods to provide end-users with intelligence, surveillance, and reconnaissance (ISR) solutions.

In its relentless attempt to stay technologically important, the Marine Corps is at a critical crossroads. Marine F / A-18 Hornets are currently not allowed to use laser-guided bombs (LGBs) when targeting a target with its NITEHAWK targeting pod, owing to the poor precision of the pod and greater odds of misidentification of the target. As a solution, a new targeting pod is being chosen and incorporated by the Navy and Marine Corps, as well as by F / A-18 air forces around the globe. The contenders are the LITENING AT, in service with Marine AV-8B squadrons, and the Advanced Tactical Forward-Looking Infrared (ATFLIR) pod, in service with Navy F/A-18 Super Hornet squadrons. Present plans are for the Marine-air-assault (land-based D model) Hornets to receive the LITENING AT, while the ATFLIR will be received by the Marine carrier-based (A+ and C) Hornets. However, since the LITENING AT is equally efficient, less expensive, and more readily accessible, the Marine Corps can equip its carrier-based F / A-18s with the LITENING AT instead of the ATFLIR.

Millions of shades of color can be seen by the naked eye, a capability that helps routine decision-making. Additional details can be crucial in the military surrounding, reducing the time needed to validate a target's identity and take action. With a resolution larger than 1 K x 1 K, LITENING 's optical color video provides military commanders a far more accurate understanding of their area. Designed with a modular open architecture, it is possible to change every LITENING pod to the color configuration. This update also provides the ability to capture continuous video streams for post-mission review from both sensors, automated display of laser code, and an eye-safe mode that facilitates more practical training when operating the laser.

The United States Air Force placed an initial order for the LITENING advanced targeting pods announced by Northrop Grumman Corporation in July 2020, while Northrop Grumman has already delivered about 900 LITENING pods as of mid-2020 to the United States Air Force and its other foreign customers. The fourth-generation airborne tracking pod of Northrop Grumman hit the 1 Million flight hours milestone in February 2019 with combat aircraft platforms after the system was launched in 2012. The new iteration of its LITENING pod has been operated on aircraft platforms such as F / A-18, F-16, F-15, C-130, B-52, A-10, and AV-8B by the United States and foreign defense customers. For the system's II, extended range improved targeting, and fourth-generation models, Northrop has also reported almost 3 Million operational hours as of mid-2019.

For the first time, the United States Air Force F-15C Eagle launched an AIM-9X Sidewinder air-to-air missile using targeting data generated by the infrared search-and-tracking pod of the Lockheed Martin Legion. On July 8, 2020, during training at Eglin AFB, Florida, the AIM-9X live-fire mission took place. Five days later, the first-ever operational test flight carrying the pod was conducted by an F-16DM from the same unit. In dynamic electronic warfare scenarios, the Legion Pod gives F-15C and F-16C / D pilots the ability to locate, track and attack aircraft, including stealthy targets that cannot be "seen" on the radar. The pre-developmental evaluation stage of the Legion Pod started at the beginning of 2019.

Integrating the Legion Pod with the AIM-9X's advanced functionality has proven to be crucial. With its data-link and lock-on-after-launch upgrades, the AIM-9X Block II, also identified as the AIM-9X-2, which entered operation in 2015, provides a major leap forward in functionality, ensuring it can be fired at an adversary without first locking its seeker on to the target. Today's AIM-9X is more than just an air-to-air missile for short-range aerial combat. The imaging infrared seeker can see far beyond the range it can potentially reach in some environments and an extended range version is in progress.

The Legion Pod flew on an F-15C for the first time in 2016 and the Air Force chose the Lockheed Martin system over Northrop Grumman 's Open Pod the next year. The USAF then awarded Boeing a deal to incorporate the pod into the F-15C, including USD 154.6 million for engineering, production, development, integration, testing, and delivery. A total of around 130 pods were planned to equip the F-15C fleet. 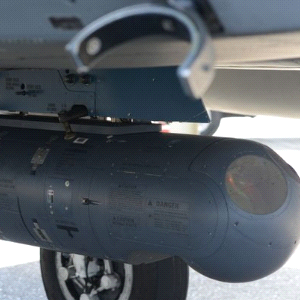