As the war in Ukraine continues the world economy is also going through turbulent times, with soaring energy prices and high inflation. Governments are faced with the challenge of diverting funds to social support measures, with defence budgets being under pressure at a moment that simply replenishing ammunition stocks is already a big obstacle to overcome in a short period of time.

Do you see recruiting shortages in your market in the post-pandemic period?

In the wake of the COVID-19 pandemic, there has been a shortage of labour force across all sectors, and the defense and aerospace industry is no different. It has been widely observed that only around a quarter of the workers that were furloughed during the pandemic had returned to their previous posts due to better remuneration and working conditions.

As a result, many companies are reporting that they are unable to reach their skilled labour recruitment targets in 2022. The rigid demands for the employees of defense contractors (i.e. security clearance) are repelling workers from the industry or delaying their hiring. The latter is further exacerbated by the level of specialized training required in the industry. Similarly, the industry often offers long commutes and limited options for remote work, further reducing its attractiveness.

On the demand side, the ongoing war in Ukraine and the increasing tensions surrounding Taiwan have caused a spike in the demand for military hardware. The continuous supply of equipment and munitions to Ukraine means that countries are seeking to replenish their inventories faster than expected. The unpredictability of how long the war in Ukraine will last and in how aid will take shape in the (near) future results in a lot of uncertainty on the demand side.  Furthermore, Russia’s aggression is also pushing many European nations to increase their defense budgets, thus increasing the overall demand in the market.

This combination of a reduced labour force and increased demand puts the industry into a precarious position. Moreover, the high inflation rates, the disruptions in the supply chains, the competition among major powers and the overall costs of raw materials are serious sources of risk. Adding labour cost into the equation, either in the form of financial incentives to attract skilled workers or paying overtime to extend shifts in order to meet deliveries is an additional risk. All these could result in cost increases that should be borne by the customers and/or reduction in the profitability margins of the enterprises.

Furthermore, while the overall pool of STEM workers grows, it is not growing fast enough to keep up with the increased production demand and the retirement rates.

Such risks require government intervention with targeted measures similar to those that had been put during the pandemic, which will have to be continued or expanded as serious risks remain ahead.

Is it time for a political settlement of the Ukraine crisis?

With thousands of casualties, millions on the run from the violence and billions of dollars in damages, the consequences of the war are growing more visible every day. And with this, the call for a political solution to the conflict also grows. Sadly, a political solution to the conflict seems far from likely. As the Ukrainian President V. Zelensky of Ukraine stated, the country is unwilling to accept any deal involving the surrender of Ukrainian territory to Russia. Furthermore, V. Zelensky signed a decree on 3 October 2022, stating that negotiations will not be held with the Russian President Vladimir Putin, declaring working with him to be “impossible”. This sentiment was echoed by the US in light of the upcoming G20 summit in Indonesia.

At the other end of the conflict, Russian Foreign Minister Sergei Lavrov stated on 30 October 2022 that Russia is ready for negotiations if the West “fully takes into account the interests” of Russia and its security, as well as “offers some serious approaches that will contribute to defusing tensions”. These approaches by the West would involve returning to the agreements offered by Russia in late 2021, which include the demand that NATO will not expand further towards Russia and abandoning any military activity on the territory of Ukraine, other states of Eastern Europe and Central Asia, although these do not fit with the demands of Ukraine and NATO and thus, will most likely not result in any progress.

Have cyberattacks to your business increased after the start of the war in Ukraine and how safe do you feel?

Russia launched its war on Ukraine on 24 February 2022, but Russian cyberattacks against Ukraine have persisted ever since Russia's illegal annexation of Crimea in 2014, intensifying just before the invasion. Non-Ukrainian actors have also been targeted by the Russians, even in the years before the invasion. Notable examples include the distribution of hacked Democratic party emails, which both the FBI and CIA attribute to Russia, and attempts to gain access to MH17 process documents by hacking Dutch government computers, both in 2015. More recently, a Russian attributed cyberattack took down the websites of several US airports.

What the examples show is that these cyberattacks have the ability to temporarily cripple vital (civil) infrastructure, obtain and distribute sensitive information or disrupt government or private operations by blocking access to files and servers. According to the Cybersecurity & Infrastructure Security Agency (CISA) defense contractors are among the companies and institutions targeted by Russian cyberattacks. As a research by Trustwave shows, these cyberattacks are mostly carried out by agencies and operators within the Russian government, as opposed to enlisted private hackers and companies.

In light of the risks of cyberattacks, our survey asked respondents about how Russian cyberattacks have affected their business since the start of the war in Ukraine. Interestingly, more than a third (38.4%) reported an increase in cyberattacks since the start of the war in Ukraine, with 7.8% reporting they need to invest in order to address the increased volume. The majority of respondents (60.6%) did not report an increase in cyberattacks, instead reporting a similar volume to before the invasion. Regardless, these results show the importance of properly preparing for cyberattacks.

Do you think defence companies’ production capacities are ready to meet the increased demand due to the war while winning new contracts?

The defence industry is currently facing several challenges that impact its ability to meet the growing demand for equipment. Furthermore, the war in Ukraine has exacerbated these problems as it brought a state of urgency in production with governments and suppliers working hard to address them.

Throughout the different Tiers the industry in the post-pandemic era is facing staff shortages, while called to operate in a difficult economic environment which renders it difficult for suppliers to commit to longer term contracts, thus transferring the high costs to the rest of the chain.

In addition, inflation and energy prices as a result of the war in Ukraine impact every aspect of a country’s economic activity. Governments are called to re-prioritize their budgets to provide social support. We should expect defence budgets not being implemented to their full extent or programmes being delayed with payments transferred towards the end of the budget year.

Furthermore, the economic war with China and the harsh lessons of disrupted, overseas supply chains learned during the pandemic, have resulted in western efforts to bring the supply of materials back home. However, that is a process that will take years until it reaches to a point where western supply chains will be safeguarded to the best possible extent.

In a recent conference featuring some of the largest defence contractors, such as Raytheon, Elbit Systems and Lockheed Martin, opted for a revamp of the acquisition system to help them better meet demands. As these companies argued, with better insight into the demands, they can improve their communication and demands of sub-suppliers and thus improve the overall workings of the industry.

The pandemic had already helped western governments establish procedures that expedited contracting and funding procedures, which also supported the suppliers’ liquidity and stability. These processes are already in place, but due to the war in Ukraine production had to increase manifold from that of a thin, peacetime supported function to a war-like one, especially in the segments of ammunition and missiles.

According to our poll, 45.5% of the respondents agree that their production capacity has to increase in order to meet the war requirements and cover new contracts, 33.3% are ready to meet those requirements but with some minor delays, while 21.2% consider themselves fully capable to do so.

Do you see a risk for the European industries from the Russian energy supply disruption?

The European industrial development had become heavily reliant on cheap Russian gas coming from the pipelines in the North and the trade relations with China. The interdependence developed in the middle of the competition of the US with Russia and China. That of course wasn’t enough to deter Russia from invading Ukraine. The EU countries were taken by surprise as large investments in Russia had to be withdrawn or sold, while the economic development model of the industrialized ones was put into risk.

The need to financially support households and businesses through different measures, including putting a price cap on gas, has become a source of strong disagreement among EU members. Despite the flexibility-easing agreed over the Stability Pact (inflation and deficits), as a result of the pandemic, the lack of swift and decisive action on a group-level due to diverging interests, has made the situation worse.

There are governments that struggle to support their economies and who will be forced to reduce spending in the future, in order to pay for the deficits accumulated in the current period. On the other hand, Germany’s announcement for an EUR200 billion fund that would support its businesses and households has received severe criticism from other EU members at a time when the Union is called to take action as a bloc.

Moreover, Berlin’s reluctance to accommodate US worries over allowing China to buy the controlling stake in a Hamburg port terminal, is characteristic of where Germany and the EU are found in the US, China and Russia competition.

Will the increase in defence budgets announced by several countries be fully implemented?

After the easing of the pandemic-related restrictions and the gradual return to normality allowed governments to make plans that would boost defence spending and acquisition to the previous levels. However, the economic warm up was accompanied by increased inflation, shortages in recruitment, lack of resources and high fuel prices. This mix resulted in recessionary forces being exerted on the economies, forcing governments to take immediate action.

The need to spend on measures that support people’s incomes results in less funding being available for other segments of the economy and defence as well. Therefore, we would expect defence procurement to lose the momentum it developed in the previous months. Instead, we should anticipate reductions in the funds finally allocated to procurement by reprioritizing programmes or extending their implementation period.

The UK is a recent example where we could see a significant change in the defence budget. The country’s prime minister Rishi Sunak has not pledged to raise defence spending to 3% of the GDP by 2030 or even to the 2.5% announced by his predecessor Boris Johnson. However, considering the inflation level we could expect the defence budget to be reduced in real terms.

Similarly, France is planning to cut major programmes, include those that are developed in cooperation with other European partners, thereby impacting multinational projects. Further to the last point, the European Defence Agency’s “Coordinated Annual Review” showcased the lack of cooperation among European partners, which is limited to 18% of the overall investment in defence and security projects. 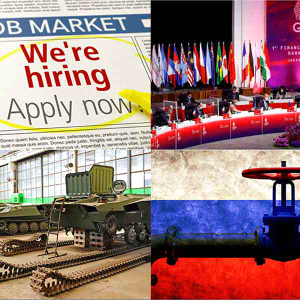