During the second semester of the year, we have witnessed the unfolding of the war in Ukraine and the efforts of global supply chains to get back on their feet after the COVID-19 pandemic. However, the path to normality is hindered by the war and the disruptions in the supply chains it brought, as well as high inflation rates all around the world. The latter is cutting and will continue to threaten the economic development that we have been witnessing in the post-pandemic period. The war in Ukraine is accelerating the changes to the balance of power around the world that we will continue to witness in the coming months.

Financial pressures and delivery delays due to the supply chain obstacles

Inflation is soaring all over the world crunching the growth rates which were the result of the economies bouncing back from the pandemic’s restrictions. For example, the UK’s inflation rate rose by 9.1% in May, 8,6% in the US, 5.8% in France, slightly over 5.1% in Australia, 7.9% in Germany, 7.7% in Canada and 2.1% in Japan, to name a few countries. However, that also resulted in shortages in the supply chains, which are becoming more severe due to the war in Ukraine and the trade conflict with China.

The inflationary pressures add up and magnify the impact in the citizens’ lives. That forces governments to spend money to implement social support policies. At this point, it would be important to see the Eurozone’s reaction towards inflation and the debts formed during the pandemic. Would the ECB continue the quantitative easing initiative or would the area be forced to return to fiscal tightening in order to reduce inflation and debts?

Furthermore, the war in Ukraine not only maintains this situation, but also requires from Western countries to provide material support for the continuation of the war against the Russian forces. Such measures will reduce the fiscal room that is required to implement large-scale procurement programmes.

According to the market sentiment poll, 54.4% of the responders still feel pressure and delivery delays from the supply chain and expect it to continue throughout the year, while 26.5% believe that they are more resilient after the measures taken during the pandemic. The remaining 19.1% think that the pressure continues, but it will improve by the end of this year.

The current state of the supply chain imposes certain obstacles, which will take time to overcome considering the war in Ukraine. We have already observed that some military equipment, such as anti-tank weapons, that have been offered to the Ukrainian forces from the inventories of Western armies will take time to be replaced. Simply by considering the shortages in microchips and the interdependence of their supply chain, from the raw materials to the end-product level, it is easy to understand the obstacles when sanctions are imposed or other disruptions occur.

That raises the question of whether the supply chains are ready to handle the requirements of a war like the one in Ukraine, even if it is fought away from a country’s mainland.

As in every conflict, military leaders try to validate their strategic and tactical beliefs, understand how an opponent is expected to fight, how efficient are the current force structures and the equipment they use. All these will help shape the future of warfare. One of the areas that received attention were the main battle tanks. The wars in Afghanistan and Iraq favoured the use of light infantry, motorized and sometimes mechanized forces, in place of heavy armoured ones.

However, confronting a near-peer competitor necessitates, among other things, heavy forces. Russia’s military planning had relied on such heavy forces, and it was the first time they were seen operating. Several tactical mistakes were conducted during the first weeks of the invasion in Ukraine and a question was raised in the public speech. Are tanks obsolete with the proliferation of all types of anti-tank weapons or are they still a key platform for the future operations?

A total of 73.1% believe that the main battle tanks and armoured vehicles are not obsolete in the modern battlefield. It’s all a matter of tactical use, of using the right type of armoured vehicle for every mission and about using protection systems. On the other side less than a third, around 26.9%, believe that they are indeed obsolete.

The role of the EU in the Ukrainian war

The war in Ukraine has deeply changed the political landscape of Europe and brought the end to the thought that economic interdependence alongside any other form of interdependence would suffice to maintain stability and peace. However, a determined opponent such as Russia that considered the interdependence (e.g. in the energy sector) as a leverage for the success of its plans, there was not any credible deterrence from the part of the EU.

With NATO providing security, the EU had been regarded mainly as a soft power, which would promote dialogue and economic measures or countermeasures to resolve crises. Moreover, the lack of an EU-wide “national interest” there was no way for Russia to be deterred. Indeed, the EU leaders’ efforts to resolve the brewing crisis failed and a single front against Russia was formed only after the US and NATO took the initiative. Although it took some time, the EU managed to show determination and now lead in the political level, while its member-states being also NATO-members have shown their resolution.

In the question whether the war in Ukraine has reduced the EU’s ability to play a key role in European security or whether it has upgraded it, those who believe the latter as slightly over half of the total, with 53.1%. Those believing that the war showed the deficiencies and the fragmentation in the EU’s foreign and security policy were 46.9% of the total.

The second question related to the EU was whether the war consolidates it as a soft power. More than half of the responses (56.7%) consider that soft power needs to be backed up by hard power in order to be effective, while 22.4% believe that the EU can play the role of the financial and political support mechanism. Finally, 20.9% envisage that the EU can play a role beyond the geographical limits of the European region. 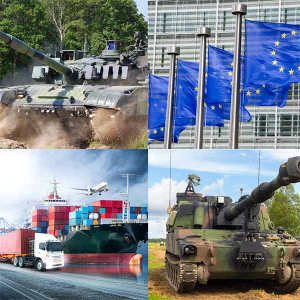