The advent of mechanization of the infantry led to an unstoppable force, there was a clear need for a system which could stop these infantry advances. This need gave rise to the predecessors of this market like the RPG and anti- armor rifle. However, the shortcomings in those markets evolved into the Anti-Tank Guided Missile Systems Market. The key success indicators of the Anti-Tank Guided Missile Systems are Accuracy, Range, Guidance, Cost and Weight, the other most important parameter is the survivability of the operator.

The initial Anti-Tank Guided Missile Systems were personnel carried and operated by a crew of 2-3 personnel. There was a clear need for more lighter, yet powerful Anti-Tank Guided Missile Systems, this introduced the use of composites in the ATGM Systems market. The platforms like Javelin use composite launch tubes, these reduce the weight of the platform. The second requirement was to equip a few infantry vehicles with ATGM Systems, the vehicles in this context includes both the land platforms and rotary platforms. The key difference between the vehicle mounted ATGM Systems and personnel carried are the loading and the firing mechanism.

A typical ground vehicle has an extended load system which enables auto loading, the newer technologies like Remote Fire Control Systems (FCS) allows the infantry vehicle to fire the missile without exposing the personnel. It is also important to note that the ATGM installed variants of the ground vehicle would have a separate variant name, an example is the Stryker M1134 ATGM. This platform is armed with the TOW missile systems, it can provide long-range anti-tank fires against armor beyond tank gun effective range.

The ATGM Systems Market has witnessed multiple indigenization programs, these are predominantly in APAC countries. India is an example wherein a Government owned firm Bharat Dynamics Limited is expected to locally manufacture Spike Missiles. The technical know-how is provided by the Israeli Government through Transfer of Technology (ToT).

A just released study on Global Anti-Tank Missile Systems examines the market sizing for personnel carried, ground vehicle and aerial vehicle mounted systems. Both manned and unmanned platform are considered. The total market is estimated at around USD 10.6 Billion in 2020 and is expected to grow to grow to USD 14 Billion in 2028 at a CAGR of around 4%. The key technology developments in the Anti- Tank Missile System Market revolve around guidance, penetration, range, unmanned platform and weight. 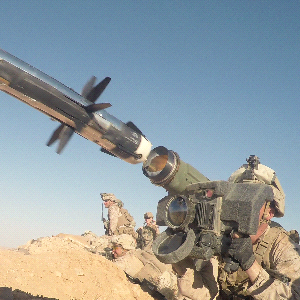