Military budgets often reflect how strongly a country perceives the likelihood of threats against it, or the amount of aggression it wishes to conjure. In 2019, Global military roughly spent around USD 1.9 trillion on military and defense that was approximately 2.2 percent of the world’s GDP. The growth in military spending in 2019 as compared to the previous year was the largest annual growth in the past decade.

One of the key drivers of increased military spending are the Global conflicts or the threat of war. If a country is at international war it spends around an additional 2.5 percent of its GDP on military. Countries that have a history of international war spend around 1.3 percent of their GDP more on their defense budget than countries that do not. A past war raises military expenditure because of a perceived higher risk of future war.

The regional Geopolitical situation which could possibly lead to a conflict is also a key driver to this market. Instability in a region, or a perceived risk of aggression by neighboring countries is another factor which raises a nation’s military expenditure. The level of military expenditure chosen by a government is to an extent, influenced by the level chosen by its neighbors. This can be seen by the high military burden of the countries in the middle east. The presence of terrorist organizations like the Islamic State (IS), al-Qaeda-linked groups, Boko Haram, and other extremist movements, also causes instability in a region. These organizations have exploited wars, state collapse and geopolitical upheaval in the Middle East, and have begun to gain new footholds in Africa.

The study analyzes the defense budgets of top 20 military spending countries of the world in detail. Considered are the countries’ military strength, their yearly and forecasted defense budget, and their military spending on the basis of department and end use allocation. It also analyses the important upcoming procurement programs of the nations, including their soldier modernization programs. 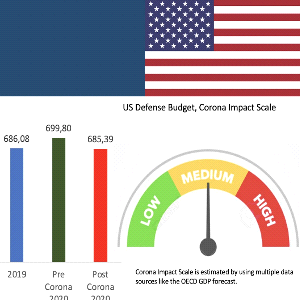