APAC to dominate the Riflescope market

Telescopic sights and mounts have come a long way since their invention, especially since the end of World War II. Shooters can now see far away targets clearly and aim precisely at them. Scopes' optical clarity, reliability, and accuracy have all significantly improved. In hunting scopes, adjustments are almost always made internally, and reticules remain centre. Leupold's "Duplex" style reticules, which feature a thick crosshair with a fine centre cross area, have largely replaced the old standard crosshair, as well as the Lee floating dot and the post with a crosshair. Various sorts of range-finding reticules are also available.

The advent, and then dominance, of the variable power scope, has been one of the most significant changes. This was made possible by advanced, computer-assisted optical design and multi-layer anti-reflection coatings. Traditional 2.5x, 2.75x, and 3x scopes are almost extinct. The 1-3x, 1-4x, and 1.5-6x variable scopes have taken their place. Most manufacturers still offer the standard "all-around" 4x lens, but the 2-7x variable is typically the same physical size and more flexible. For long-range big game rifles and medium-range varmint rifles, some manufacturers still offer the conventional 6x scope, but the 3-9x variable is more common. Traditional high fixed power scopes have been replaced by high power variables of 4-12x and up on varmint weapons.

Manufacturing and selling optical sights is a fiercely competitive market, particularly after the entry of Japanese manufacturers. The selection of both telescopic and red dot sights has never been better. For handguns, electronic "red dot" sights are becoming increasingly common. The majority of these telescopic sights resemble small, fat, long eye relief telescopic sights, but they lack magnification. They project a red dot at the point of aim, located in the optical tube, where the crosshairs of a traditional telescopic sight would appear, using battery-powered electronics. In the same way, as a traditional scope has turrets with knobs for changing windage and elevation, red dot sights have them as well.  Some red dot sights have dispensed with the tube entirely and now comprise a base with the optical and electronic systems that are needed to project the red dot in a "heads up" display.

The majority of red dot sights come with rings and clamp to standard Weaver-style scope bases. Like a traditional lens, the red dot sight's optics place everything visible through it (red dot and target alike) in the same optical plane. Because of the long eye relief and zero magnification, a red dot sight is not needed. The brightness (intensity) of the red dot is adjusted by a knob, which normally ranges from very dim to bright enough for use in full sunlight. The glowing red dot serves as a highly visible targeting point.

Since red dot sights are powered by small coin-sized batteries, it is smart to have a spare set on hand. In regular usage, they use very little power, and a set of batteries normally lasts at least a couple of years. Red dot sights have proven to be extremely quick to acquire in competition, and since they have unity magnification, they can be used with both eyes open. They are great for pistol shooters, and they have even been used on "slug gun" shotguns.

Shooters require very bright lenses to see targets in low light. On their submarines, for example, the world's navies usually use 7x50 binoculars. These have a 7.1mm exit pupil and collect all of the light that young eyes need, even at night. However, such binoculars and a rifle scope with a 50mm target are relatively heavy and bulky. Big game hunters rarely need 7x magnification and are typically best served by anything smaller. In either case, most jurisdictions consider night hunting illegal. A 5mm exit pupil is normally appropriate for hunting applications. A 5mm exit pupil is bright enough to enable the shooter to view into shadowed areas or in very low light, and the lens can be made small enough to not add too much weight to the rifle. This means that a fixed power scope with a 2.5x magnification only requires a 12.5mm clear aperture. The exit pupil of a 2.5x scope with a straight tube and a 20mm objective is actually 8mm. For a 5mm exit pupil, a 1-4x variable needs only a 20mm objective at maximum power. A user can get a 7mm exit pupil by setting the scope to 2.85x for night shooting.

The most significant criterion for a scope that will be used at close range is the field of view. A telescopic sight with a broad field of view, such as a 1-4x variable or a 2x to 3x fixed power rifle scope, would be ideal for woods hunting. For general-purpose field usage, a 4x fixed power scope or a 2-7x variable scope is typically as good as it gets. These scopes are particularly well-suited to "all-around" rifles chambered in calibers.270,308, and.30-06. High magnification scopes can and are used by varmint shooters. For long-range varmint rifles, variable power scopes with a magnification range of 4-12x and higher are the most common.

At the ranges where dangerous animals are normally engaged, a wide field of view is critical for quick target acquisition. A fixed 2x or 2.5x scope, or a 1-3x or 1-4x variable scope, is about right. In the presence of a dangerous game, high magnification variable scopes may be fatal. If the hunter forgets to reset the scope to low magnification after using the high magnification to look or shoot at anything at long range, the shortened field of view at the higher power could be lethal in the event of a resulting accidental hit. 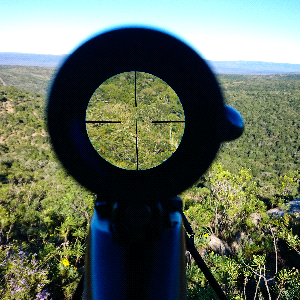