The Air Traffic Management (ATM) market experienced a serious drop following the global pandemic impact, but that didn’t stop new developments. Air traffic service providers and regulators across the globe have been shifting their focus to airspace and flight operations to enhance traffic flow, availability, performance, and safety while also allowing for greater flexibility and adaptability. The shift from radar surveillance to Automatic Dependent Surveillance-Broadcast (ADS-B) is a significant step in improving the precision and reliability of tracking aircraft in flight and on the ground. ADS-B is an advanced surveillance technology aimed to further modernize the air transport network. It offers foundational technologies for Next Generation Air Transportation System (or NextGen) and Single European Sky Air Traffic Management Research Programme improvements (or SESAR).

ADS-B was built and approved as a feasible low-cost substitute for traditional radar, allows air traffic controllers to track and manage aircraft with better accuracy and over a much higher proportion of the earth's surface than ever before. For example, after strategically placing low-cost ADS-B receiving stations, vast swaths of Australia and Hudson Bay in Canada, which were previously without radar coverage, are now viewable on ATC monitors. ADS-B is one of the most significant technological advances in the strategy to transition ATC from radar-based surveillance to satellite-based global positioning system (GPS) surveillance for NextGen and SESAR.

Navigation satellites transmit accurate time data to aircraft installed with global navigation satellite systems (GNSS) or GPS receivers, allowing them to monitor their own location and speed. ADS-B, unlike traditional radar, operates at low altitudes and on the ground, enabling it to control traffic on airport taxiways and runways. ADS-B is also used in remote locations where radar coverage is either non-existent or minimal.

ADS-B offers an increase in capacity as well as enhanced flight reliability. It enables the ATC system to increase the precision of surveillance data significantly. This enables controllers to avoid redundant vectoring commands and maintain separation assurance by allowing ATC to understand the actual separation between planes. Pilots can demand and obtain adjustments to a higher, more fuel-efficient cruise altitude, which also decreases environmental effect, using in-trail procedures, which assist aircraft is moving to optimum operating altitudes in remote locations such as oceanic airspace.

To transmit and receive ADS-B signals, special equipment is needed both onboard aircraft and on the ground. Onboard the aircraft, a Global Navigation Satellite System (GNSS) receiver, and connected antennas obtain and analyze GNSS satellite signals to determine the aircraft's location and speed. The ADS-B Out message from a specific aircraft is received using an airborne collision avoidance system/traffic warning and collision avoidance system unit and corresponding antennas. Depending on the ADS-B specifications. Other airborne devices that may be impacted include the flight management computer, control panels, electronic flight bag, screens, and related wiring, depending on the requirement. For air navigation service providers (ANSPs) all over the world, standards are needed to ensure that the airborne components function properly with the ground components.

Ground-based ATC profits from ADS-B Out in many ways. It can be used by ATC to support 5- and 3-nmi en-route separation services in radar areas. It can be used by ATC to provide separation services when no other radar or surveillance is accessible. ADS-B Out offers ground control with an image of all aircraft and vehicles on the ground for airport surface surveillance. ADS-B Out support 2.5-nmi separation in-trail approaches, 2-nmi separation for dependent parallel approaches, and separation during independent parallel approaches for runways more than 4,300 feet apart in the terminal area.

ADS-B In has the ability to support all aspects of flight, from take-off to landing. It enables situational awareness of other planes and vehicles on the airport surface, as well as situational awareness of other airborne traffic, including assistance in identifying targets outside the cockpit window using the CDTI. ADS-B In also increases situational awareness during the approach, allowing for continued CDTI approaches after the initial visual acquisition. The use of ADS-B is growing all over the world. ANSPs are looking at ADS-B as a way to reduce service costs while also improving the regional air transportation system's operating efficiency and capacity. 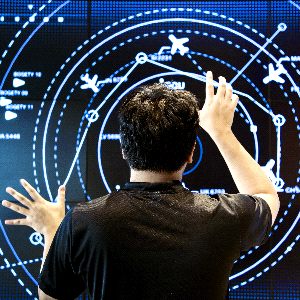